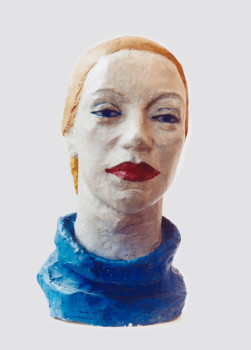 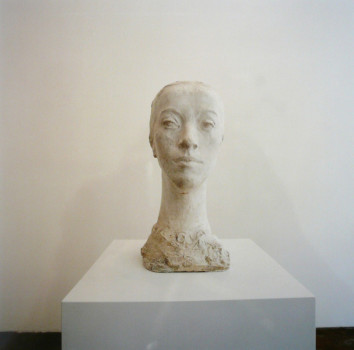 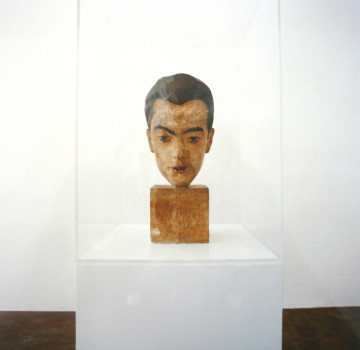 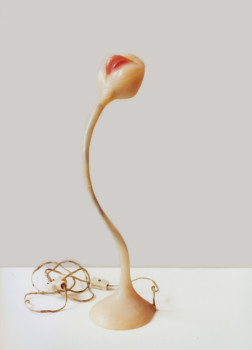 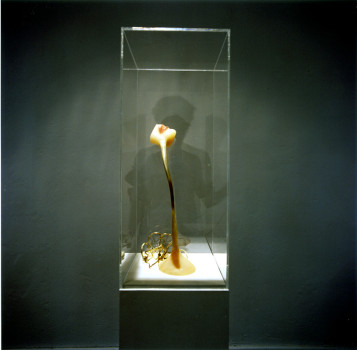 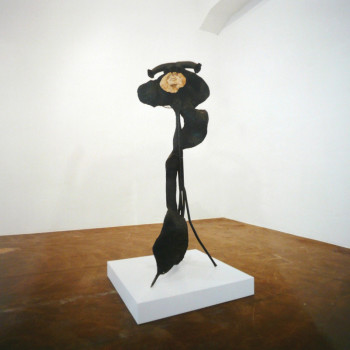 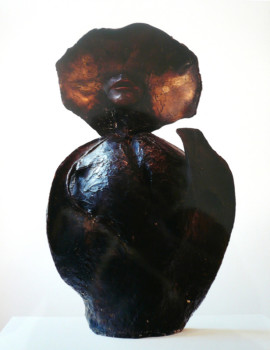 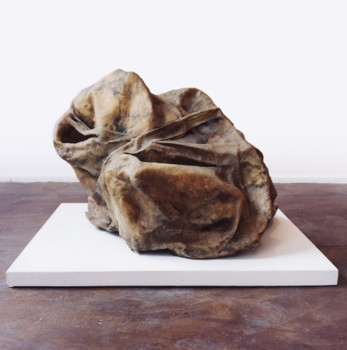 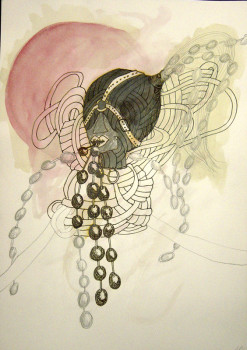 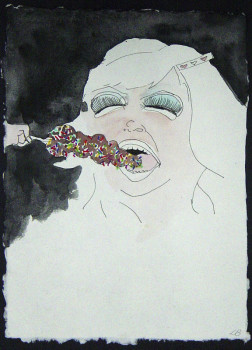 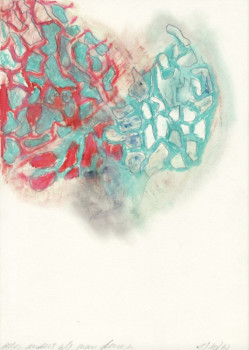 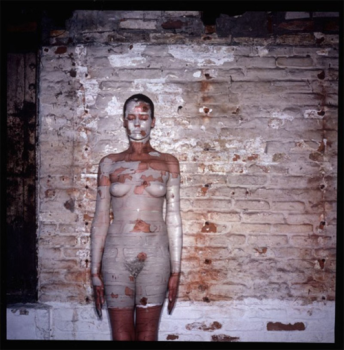 At the heart of the exhibition “Don’t cry baby – work!” at Galerie Isabella Czarnowska is a large display of works by the Polish artist Alina Szapocznikow (1926–1973). Engaging in a dialogue with Szapocznikow’s exceptional oeuvre are works by Lisa Becker (*1971) and Vera Lehndorff / Holger Trülzsch (both *1939). While each of these contributions displays a high level of artistic autonomy, the joint presentation reveals fascinating and diverse correspondences in both form and content.

Alina Szapocznikow’s work occupies a unique position in Polish art of the post-war period, yet her legacy remains largely unknown. The Szapocznikow retrospective curated by Anda Rottenberg at Galerie Zacheta in Warsaw in 1998 was one of the major presentations of her work in recent years. Born in Kalisz in 1926, Szapocznikow was forced to spend much of her childhood and youth in the ghetto and in concentration camps. Having studied sculpture in Prague, she subsequently moved between Warsaw and Paris, before finally settling in Paris in 1962. Here she became closely associated with the Nouveaux Réalistes, including Pierre Restany and Pierre Cabanne, and it was in Paris that she died in 1973, aged only 46. The central focus of Szapocznikow’s work is the human – above all female – body, which she regarded as a “totally erogenous zone”i and which appeared in her sculptures in many different constellations. Szapocznikow’s formal language was influenced both by the formalism debate of the 1950s and her interest in surrealism. From the mid-1950s onwards there is a noticeable shift in her work toward the distortion and deformation of the body, and above all toward fragmentation – the isolated depiction of individual parts of the body and the elaboration of their fetish-like character. Making impressions or casts of human bodies or body parts became one of Szapocznikow’s signature techniques, and from the mid-1960s onwards she increasingly used synthetic materials such as polyester or polyurethane foam, which enabled her to produce highly detailed casts and new, very free sculptural forms. Szapocznikow’s sculptures emerge from the tension between the internal and external perception of the/her body. At the same time, her almost obsessive preoccupation with the body seems to be an attempt to reassure herself of her own existence, which had been repeatedly threatened by her concentration camp experience and also by illness. In many of Szapocznikow’s works there is a striking contrast between the fragmentation and deformation of the human body and the extremely natural depiction of individual body parts, such as the lips in her lamp objects (see illustration). This ambivalence not only emphasises the fetish character of individual parts of the body as representative of a “totally erogenous zone”, it also introduces the threat to and destruction of the body – and ultimately death – as a theme. “The body is the source of all joy, pain and truth,”ii Alina Szapocznikow once said, alluding to the simultaneity of sexuality, lust and the zest for life on the one hand, and of the experience of the body’s vulnerability and openness to threat on the other, materialised in an act of sublimation in her artworks. Indirectly, by working through the process of grief and unsparingly reflecting upon the threats to her own life, Szapocznikow developed a vehemently independent formal language. “Don’t cry baby – work!” – the title of the exhibition at Galerie Isabella Czarnowska borrowed from a gouache by Lisa Becker – thus seems particularly applicable to Alina Szapocznikow, whose powerful artistic language emerged against a background of historical, political and personal adversity and often traumatic experiences.

“Don’t cry baby – work!” urges a self-portrait of Lisa Becker with lips painted dark red. This can be interpreted as an appeal to overcome negative experiences and situations through (artistic) work, but also as a reaction to the often precarious working conditions of artists: if you want to survive there is no point complaining, you have to get down to work. Born in 1971, Lisa Becker belongs to a different generation than Alina Szapocznikow, but remarkable parallels can nevertheless be drawn between the work of the two artists. A central aspect of Lisa Becker’s art is also the female body and its significance as an erotic and sexual entity. Her work frequently explores issues such as the subject of particular actions – not least due to her continual reflection upon her own role as a woman and her position as an artist. Lisa Becker works across a wide range of media including drawing, installation, video, performance, collage and painting. An extensive series of 166 works on paper of varying sizes is on show in the exhibition. “Hardboiled Wonderland” (2000–2004), as these individual sheets are jointly titled, reveals itself to be an ambivalent wonderland – a place where good and evil, the beautiful and the ugly, the pleasant and the brutal combine to form unexpected alliances, and thus the work is at once a latently malicious and a humorously ironic comment upon the ‘anything goes’ mentality of pop culture. The repertoire of themes and forms included in Becker’s vast artistic universe derives from a wide range of sources. She draws inspiration from European art history since the Middle Ages as much as from traditional African masks, Japanese mangas, computer games, fashion magazines and equipment used in a variety of sexual practices. Corsages and latex masks appear alongside cute, wide-eyed comic figures, aggressive bulldogs, elaborately made-up faces or abstract colour fields. Many of the works also include text in the form of diary-like notes, brief manifestos or found slogans and sayings that have been repeated in order to try and ascertain how they work. The curious homogenisation of heterogeneous elements in “Hardboiled Wonderland” is also a reference to the Internet with its rhizomatic structure, where every point can be connected with every other point. Like Szapocznikow, Becker directs an almost dissecting gaze at the body, often presenting individual elements – here, too, lips are a common motif – as fetishes. Other works feature clothes, shoes or masks – devices used in the game of concealing and revealing the body. Another frequent theme is the stereotypical depiction, extreme stylisation and overdetermination of the female, as for example when we gaze into the large eyes of the eternal Lolita-like characters from Japanese comics. For Becker, as for Alina Szapocznikow, Vera Lehndorff and Holger Trülzsch, the relationship between self- and other perception of the (female) body is a subject of ongoing research. In the context of an often very sensual approach to physicality and sexuality, as is shown in “Hardboiled Wonderland”, the element of violence also plays an important part. This can be conveyed in a playful manner, such as in her depictions of sadomasochistic fetishes, but it can also have brutal overtones, as in some of the comic-like scenes. Here, too, the portrayal of violence involves a possible threat to and destruction of the body and thus of life itself, and Szapocznikow’s statement that the body is the source of all joy but also of all pain is also relevant here.

In the late 1960s, Vera Lehndorff (*1939) and Holger Trülzsch (*1939) began making complex performance works that involve quite different forms of portrayal and exposure than that experienced by a fashion model, in which role Lehndorff worked for many years under the name of Veruschka.iii Drawing their inspiration from the respective locations – such as a disused fish auction hall in Hamburg or a warehouse for old clothes and textiles in Prato, near Florenz – the artists developed anamorphotic designs for painting Lehndorff’s naked body, which in the resulting photographs seems to merge with the surroundings. Each of the carefully and elaborately composed ‘living pictures’ formed the basis of performances lasting up to 20 hours and held out of public view. Often the artists worked to the point of complete exhaustion, so that the phrase “Don’t cry baby – work!” applies here too. The performances were documented in photographs, and some parts were also filmed. A central concern of these works is the investigation of surfaces and materiality, the relationship between subject and object. All the artistic genres are reflected in the images created in the context of the performances: drawing, sculpture, painting, performance, and of course photography – which here incorporates, as it were, all the other genres. The opportunity to explore her own role as a model posing for the photographers’ cameras, staged to conform to glamorous ideals of beauty, was an important impetus for Lehndorff’s photographic and performance works. It is almost as if – in contrast to her exposure as a model – she here wanted to merge with the backgrounds, to blend and vanish into them. Painting the body evokes its object-like quality and at the same time raises the question of the construction of the subject. Vera Lehndorff and Holger Trülzsch’s images are concerned with the self- and other perception of the female as well as the self- and other fetishisation of the (female) body – and invariably with the direction of the gaze. In Lehndorff and Trülzsch’s work, the interplay between veiling/covering and unveiling/nakedness, between the materiality of the background and the materiality of the body, also questions the categorisation of the beautiful and the ugly, the notion of beauty and decay. The ruinous, disintegrating state of the backgrounds – the rust, peeling paint, discarded and stained fabrics – provide a strong visual contrast to the glossy surfaces and artificial staging of fashion photography, where the deterioration of the body is taboo. At the same time, however, fashion was “never anything other than the parody of the motley cadaver, provocation of death […] bitter colloquy with decay”, to quote Walter Benjamin.iv