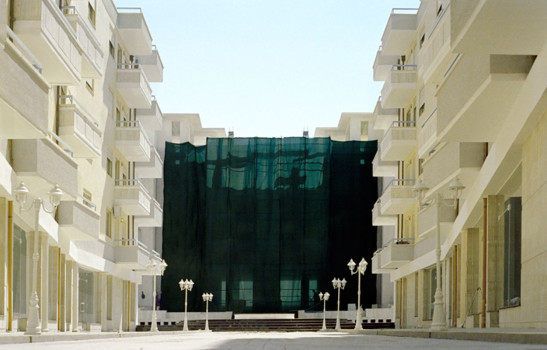 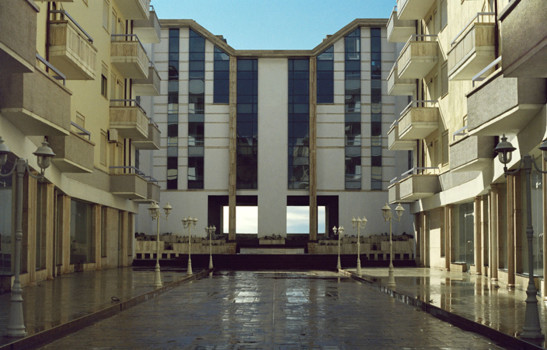 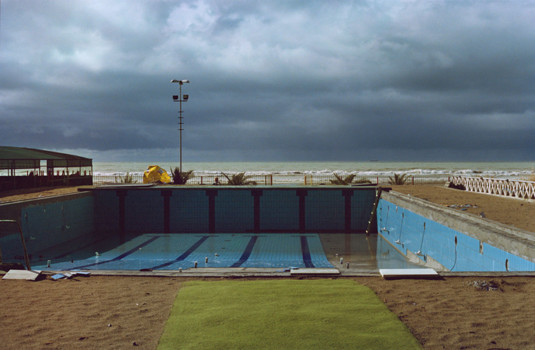 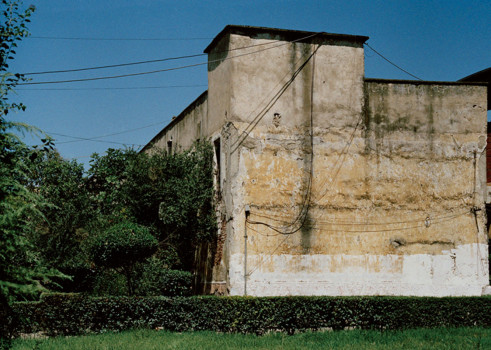 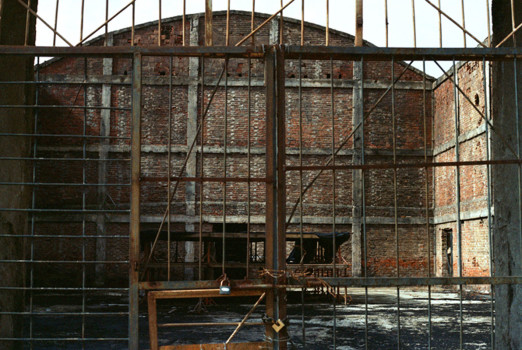 press release [en]
Albania or somewhere else on the edge

At the entrance to the exhibition is a photo, an empty swimming pool. Just behind that, the sea and to one side a theatre backdrop constructed in concrete. No one is in sight. Absurd. Life poured liked concrete stands stiff, the space where the week-end cabins once stood is deleted, built-over. Ghosts like those in Shining could appear again. There’s a feeling of mystery, what’s below the palimpsest? The title of the exhibition associates the terms: over-illuminate, over-light. Perhaps there’ll be no arrival, just a to and fro between walls.

I stood at the coast, the ruins of Europe behind me, and spoke to the froth: BLA BLA. Heiner Müller in the 80s. What followed was the collapse of Eastern Europe, and then the hope of being engulfed in a golden world at lightening speed. Now, tumbling back to reality; arriving behind the façades of speculation. Non-places

The last ten years have seen the creation of some terrible non-places. ‘No place nowhere’ – another well-known literary phrase which falls to mind, 2009. The documentation is a chimera of globalisation, so documentary film festivals and documentary photography are all over. What do you actually want to see or even take with you? The unknown? You won’t be able to find it any longer. After the sad tropics, there’ll only be tropics as mirage. All that remains are fragments of memories. Empty hotel swimming pools in front of the sea, empty theatre backdrops à la Paris, everything just a few years old and already consigned to oblivion. What went wrong in Silva Agostini’s pictures, what do they show? Are they metaphors for social backdrop? They aren’t documentary; they’re too abstract, too dry. It’s a metaphorical approach. The picture thus created is a distortion of the real. The artist causes confusion in the observer with the smallest changes in perspective. Nothing is planned or set in scene. It’s simply observed. And so the mood of those attending the exhibition is influenced. The general atmosphere of the exhibition is tainted by sadness. Whether films or photographs, Both give an impression of the outside. The artist has a cool, distant perspective and the individual elements of the exhibition come together to form a canon of absence. There’s a series of circular landscapes; you wonder what you see and begin to concentrate on irrelevant details before noticing that something’s missing.

The material is taken from those treasured shoeboxes of family photos still common across the globe, photos with various backdrops, here those of the artist’s own family. But that’s irrelevant. What’s striking is that people are missing. The viewer is reminded of the photography’s beginnings in the 19th century by the use of such round formats. There’s something voyeuristic about the pictures, yet the object of attention is missing. We see an empty space. Entropy has removed the person actually constituting the picture. The origin of the film idea lies somewhere between fiction and reality. What’s to be given primacy? The film perspective lives from settings and camera motion. Agostini is interested in these filmic elements, in fact her work consists of turning these individual vectors around; sometimes the direction of movement or the axis of projection, sometimes slowing speed. The result is a furious journey through the suburbs. Ordinary suburban buildings become mysterious complexes of exclusion. Who lives behind these unending walls? An ordinary street invites the question, where we come from, where we’re going. Where is this street? Is it verifiable or general metaphor? What culture produces such picture documentary material?